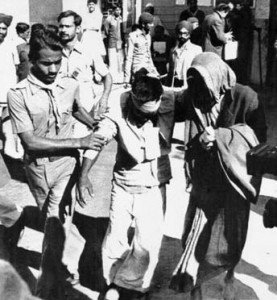 05 Dec 1984, Bhopal, India — Two people help a victim of the Bhopal chemical leak evacuate the disaster site, in Bhopal, India. The Bhopal Disaster was one of the world’s worst industrial accidents, occurring on December 3, 1984, when 40 tones of methyl isocyanate were leaked from a Union Carbide subsidiary plant in the heart of the city. Though there are final numbers, it is estimated that 15,000 people died in the first month alone after the accident, with 100,000 more suffering permanent injuries. — Image by © Bettmann/CORBIS