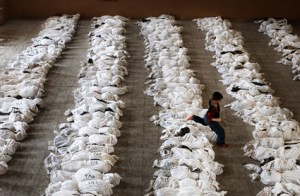 AL MUSAYYIB, IRAQ- MAY 27. An Iraqi child jumps over a line of hundreds of bodies, in a school where the body have been brought from a mass grave, to be identified, discovered in the desert in the outskirt of Al Musayyib, 40 km south of Baghdad, May 27, 2003. It has been estimated between 10,000 and 15,000 Iraqis had been reported missing in the region south of Baghdad. People have been searching for days for identity cards or other clues among the skeletons to try to find the remains of brothers, fathers, mothers, sisters and even children who disappeared when Saddam’s government crushed a Shi’ite uprising following the 1991 Gulf War. (Marco Di Lauro/Getty Images)