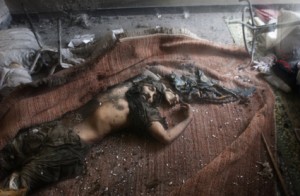 FALLUJAH, IRAQ – NOVEMBER 15. U.S Marines from the 1st U.S Marines Expeditionary Force, 1st Battalion, 3rd Marines Regiment, Bravo Company rests between operations during the offensive in Fallujah on November 15, 2004. U.S Marines fight against pockets of resistance by insurgents in Fallujah where according to the U.S authority 38 US troops and more than 1,200 insurgents died. U.S Marines now have the majority of the control in the city and are looking into food distribution to the civilian population and helping the Iraqi to rebuild Falluja. (Photo by Marco Di Lauro/Getty Images)